A few weeks ago we said goodbye to Haddler. My boys’ best buddy, our four-legged son, our family’s companion for the past 10+ years. He was, as I suspect everyone else’s dog is, special. Widely known among our family and friends as the Dumbest Puppa, he was also the sweetest and most loved.

You see, Haddler was probably the only dog in the universe (and do note I am including the Jetsons’ dog Astro, and the Two Stupid Dogs from the cartoons) that did not have the capacity to discern when people didn’t actually like him. No, he was an equal opportunity giver of unabashed canine affection, demonstrated by excited jumping (on the actual person), vigorous whole-butt tail wagging, and leaning on people until he was literally sitting on their toes or they fell down, whatever came first. This could be quite dangerous, as Haddler was, at his skinniest, 89 pounds (106 last we checked). This is bigger than many humans, including my mother-in-law. He even loved going to the vet, as this entailed a lot more people petting him and telling him he was a good boy. He got so excited when he went to the vet, he couldn’t even eat the cookies they gave him. He had no time for eating when there was petting to be had.

This exuberance often got him in trouble, not that he noticed. One time, in our previous house in CT, there were visitors at our neighbor’s house. This neighbor was a retired gentleman who, for some reason, thought Haddler was a girl and called him Heather – he was okay with the dog coming to see him once in a while; however, this time his little grandchildren were playing in the yard. Well, Haddler takes off like his tail is on fire soon as I opened the door and ran straight to the poor little kids. Panic and screams ensue, the grandfather tries to get the dog off his children (presently on the ground, with dog jumping around them), gets a stick and starts waving it in front of Haddler, hoping to scare him… and the blessed dog wags his entire body in joy. I had to go pull him by the collar with the dog literally lying on his side so that I had to drag his dead weight for what felt like an entire football field. 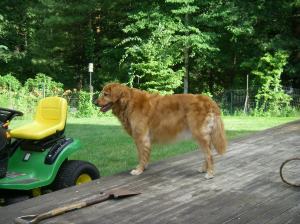 But that was the way he was. He lacked the instinct you hear all dogs have that enables them to perceive fear and dislike, as well as sympathy, so that they can behave themselves accordingly.

Haddler was a Golden Retriever, not that he ever retrieved a thing. He loved to play in the yard with the boys or my husband, and would take off to fetch the sticks they threw for him. Once the stick was located, he would grab it and run IN THE OPPOSITE DIRECTION OF THE THROWER. Sometimes he would bring the stick back, but never relinquish it – it would become a new game of tug until the stick was effectively destroyed. Most times he’d come back, sans stick, and wait excitedly for another stick to go fetch and lose. 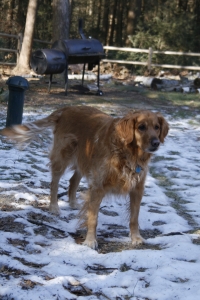 His doggie brain understood two commands – His favorite was “Sit”, because it was invariably followed by some sort of treat, and he would sit as close as possible to the person as his body would allow (1 mm apart, at the most). The other was “Stay with the mama”. This was instituted during the days when Haddler and I would say goodbye to the boys at the door, as they left to walk to the bus stop at the top of the street. It entailed his sitting on the 3rd step of the stairs on the front door entrance hall, and I would pet him until we could no longer see the boys – otherwise, he would take off after them and possibly go visiting neighboring streets in search of an open door to go through, regardless of where it led. Even though the last time we had anyone taking a bus to school was somewhere around 2005, to his last day he would dart off in search of the stairs, any stairs, every time anyone said “stay with the mama”, then wait patiently for me to go pet him and release him from his post.

Haddler loved food, just like any dog. There was no problem giving him meds – he even liked his heartworm pills and took them as if they were treats. He occasionally snacked from the kitty litter box, though he KNEW it was wrong; he only did it once he was sure we were all out the door and he was by himself. He especially loved carrots and apples (perhaps he was a horse in a former life, or was training to be one in the next), but his favorite of all times was bread, particularly Portuguese rolls. When he was a little puppy, and alone in the house while everyone went off to work and school, there was no loaf or bag of bread that was safe. We’d come home to find an entire bag of sandwich bread with tell-tale bite marks, plastic and all (well, he was a dog, not like he could untie the little twist thing and get the slices out) on the floor of the boys’ room. Haddler would jump and get the bread from the kitchen counter, so we took to putting it inside a top cabinet, under which he would patiently sit at least 5 times a day, in hopes of a rewarding bread treat.

Whenever he got a bone, Haddler would start what we called his “Bone Parade” – he would run around the house with the bone in his mouth, crying excitedly, showing his treat to everyone who happened to be there, including the person who had actually given him the bone. He went around, and up and down the stairs, until finally he sat to completely disintegrate the poor bone in a matter of minutes… leaving only a much chewed-on piece that he would then think of as a toy, and keep carrying it around for days until I got tired of the dirty thing and threw it out.

Haddler was extremely patient with his little brother from another species, our Persian cat Little Kitty (nee Fred, but have you really ever met a cat named Fred? Seriously). LK would try to engage him to play, jumping over him and trying to catch his wagging tail, while the blessed dog just quietly sighed and occasionally looked at the jumping cat. Haddler sighed with emphasis, especially when both boys were away and he would sink into a despairing depression, laying down on the kitchen floor and sighing loudly every 5 minutes. He also, I regret to say (having been on the receiving end of this) farted constantly when he was depressed. These farts, believe you me, could have been used to disperse a rioting mob. And – dumb as he was – he understood the words “he farted!!!”, as it would immediately provoke a frantic tail-wagging, I suppose in efforts to spread the love. 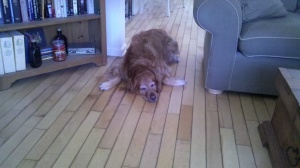 Haddler’s gentle personality taught my boys to be caring and loving. He was keenly in tune with the family, knowing instinctively who was sad, hurting, or sick. He alternated sleeping with each of the boys (on their beds), unless one of them was sick – he would then devote himself to the sick one until healed. He would give them slobbery kisses, and knew when he could not get close to their wounds or injuries (he nursed the boys back to life from two near-fatal car accidents, three surgeries, and three broken bones/sprains). When the rest of the body was off-limits, he would take off one of their socks and lick their feet. This had two advantages – he was showing love to his buddies, and he got to keep the sock to chew on. Haddler was definitely responsible for the disappearance (or at least destruction) of many a sock in his lifetime.

This sweet dog also taught all of us the meaning of unconditional love, the joy of pleasing others, and to bear pain and hurt without complain. Haddler was diagnosed with hip dysplasia before he was one year old. He lived with constant pain, and we only noticed when it was worse because he limped. He never once complained – that is why that Monday morning a few weeks back, when my boys saw him just sitting up and whimpering softly, we knew something was wrong. He would not lie down. And when brought to the vet, we got the sudden news: A tumor, originated in his spleen, was hemorrhaging into his abdomen. He must have been in excruciating pain; we had to decide then and there.

We hope that our decision to end his pain shows that we learned something from his selflessness. We sat down with him, the four of us, a blanket on the floor at the animal hospital, to say goodbye. Lights were dimmed; he had been sedated and was quietly sitting with us. He put his head on mama’s lap for one last time. The boys and my husband and I petted and told him what a good boy he was. When the time came, the vet sat on the floor with us and gently helped the boys to have him lie down. We continued to pet him and talk to him as he peacefully fell asleep, then his heart stopped.

We hope you have a yard full of snow to play with year-round, as you loved to do with us in the winter. We hope there is a doggie bakery full of Portuguese rolls. We hope you have a big orchard with already-sliced apples, and a huge veggie garden with carrots and peppers. We hope that bones, peanut butter doggie cookies, and old socks are all around you. But above all, we know that you no longer hurt. We let you go, dear friend. You are free.